Trip to the Zoo, What to Say to a Telemarketer and No Writing or Photos from John Stewart’s Rally

Stan: That headline made no sense. Goldenberg’s an idiot. Sometimes I just don’t get this blog.
Harriett: Join the club.
Stan: There’s a club?
Harriett: That makes two idiots. Anyway, what’s your beef with Goldenberg?
Stan: He still thinks he’s real and we’re not.
Harriett: I know. But I don’t have the heart to tell him. Why burst his bubble?
Stan: He’s got a bubble?
Harriett: Well, that makes three idiots. And you’re two of them.
Stan: So, the club is growing, huh?
Harriett: Yup, and you’re the Membership Chairman. What’s he talking about today?
Stan: Today’s Show and Tell Day.
Harriett: What’s on the agenda?
Stan: He’s got some photos of his trip to the Zoo , how to get rid of an annoying telemarketer and photos from John Stewart’s Rally to Restore Sanity and Stephen Colbert’s March to Keep Fear Alive.

A Day at the Maryland Zoo 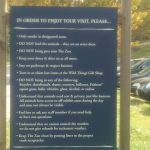 According to The Maryland Zoo Rules, you can no longer smoke or drink with the animals. Well, except for the Zebras. They're party animals.

Now that the state has taken over the Baltimore Zoo (monkeys in charge of monkeys), they’ve renamed it The Maryland Zoo. And while they’ve reduced the size and scope of the zoo, they’ve increased the Rules you (and the animals) have to follow. Here are some of the photos I took on my last visit: 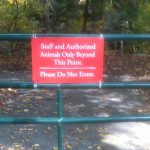 The Maryland Zoo got strict. Even the animals have to be authorized. 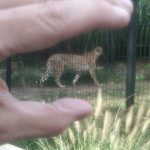 Me holding a cheetah (the animal, not the New England Patriots) 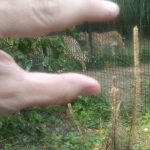 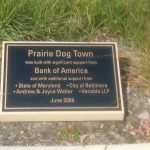 It took 3 companies, the state of Maryland and the City of Baltimore to build Prairie Dog town, which is essentially dirt, grass and holes in the ground. 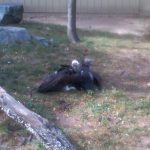 Here’s my hang up!

Even though I put my home phone on the national Do Not Call List, we still get calls from UNKNOWN NUMBER (UN). Sometimes UN is selling things. Sometimes UN is taking a survey. And sometimes he’s really sneaky, and he plays on my emotions, “Won’t you help a child in need?”

I’m pretty sure it’s the same guy calling, even if he does use different pitches, accents and voices.

Credit Jerry Seinfeld with the quintessential response to a telemarketer. Jerry got an unwanted call, said he was busy, and told the caller he’d will get back to him later, so he asked for the telemarketer’s home phone number.

The telemarketer said, “Oh, we can’t give out our home phone numbers.”

Jerry says, ” I guess you don’t want people calling you at home.”

Jerry said, “Well, then, I guess you know how I feel.” The he SLAMS down the phone.

With Seinfeld in perpetual reruns, you’ll never get away with using Jerry’s response, so here are some ways I’ve given callers the brush-off that may work for you.

I once got a call that began, “Hi, I’m selling light bulbs for the blind.”
My response: “That’s ridiculous. Why would a blind person need light bulbs?” SLAM!

Another telemarketer started of his pitch with, “Now I’m not calling to bother you or sell you anything.”
My response: “Great! Then I’d better hang up right now.” SLAM!

One telemarketer just made it too easy. “May I ask you a question.”
My response: “Yup, you just did. Bye bye now.” SLAM!

Of course, you can get more creative and up the ante. If a telemarketer disturbs your peace at home, say something disturbing to him. Whatever the caller is pitching, you respond with,”That sounds very interesting. I would like to hear more. Would you mind holding the phone for a second?”

Then put your hand over the phone’s speaker, get close to it and say in a loud, overly excited whisper. “Damn it, Harry, you’re getting blood all over mom’s carpet. Just help me get rid of the body.”

If you have any clever or creative ways you’ve had the last laugh on one of those incessant telemarketers, tell me and my readers, by leaving me a COMMENT.

Writing Comments? Not my Readers!

For some reason, readers of 10 Minutes of Brilliance do not like writing COMMENTS. So instead of publishing their COMMENTS, they just e-mail me directly. Some of the e-mail is laudatory, some critical (especially the ones I get from Stan) and some are very funny. I thought I’d include some of the more interesting ones here.

I don’t have permission to use their names, so I’ll just sign them with their initials. Of course, that system is not foolproof. With a little digging you just might be able to figure out that J.J. is really wordsmith Jeffrey Jones and the one from B.S. is really guitar player and teacher Bernie Stuart. But personally, I’m not so sure you’re crack the code!

J.J. rites about the new Majority Leader in the House, John Boehner…

I saw John Boehner fall into the Potomac this morning, and being a responsible citizen, I informed Emergency Services. It’s 6:00 PM and they still haven’t responded!

B.S. complained that my blog about Sally Field was B.S. because I unfairly maligned Mother Angelica by calling her the Lying Nun. I did. I was wrong. I apologize. Of course, B.S. calls me Golberg, so maybe he should apologize back….

Hey Golberg, the nun you have pictured here is Mother Angelica who does the Rosary on EWTN, the Catholic Network. In fact, she started the network 20 years ago. I know this to be true because I occasionally watch that network because one of my favorite priests does a weekly sermon that I watch religiously.

In case you’re interested, he’s Father Coropi and he’s very entertaining.  You can catch him Sat. Night at 10 and he does it over again in the morning. I don’t know how he does it word for word a second time!

Where’d you get your information that Mother Angelica is called the Lying Nun? I’ve never heard her called that. I think you make up some of these things. You know, like Stan and Harriett. I’m pretty sure Harriett is not real!

Harriett: Hey, what happened to the photos from John Stewart’s Rally to Restore Sanity and Stephen Colbert’s March to Keep Fear Alive that Jack was supposed to put in this blog.
Stan: Jack just ran out of steam.
Harriett: He should have used hot air. He’s got plenty of that.