I should know better. If a fully costumed trick or treater knocked on my door in January looking for Hershey’s Kisses and shilling for UNICEF, I’d have to give him Hershey’s Kick-in-the-butt. And no UNICEF money!

I don’t know anyone who has visions of sugar plums dancing in their head once The Fat Man makes his return trip to the North Pole to go elf bowling.

There. See? That’s much better, isn’t it? 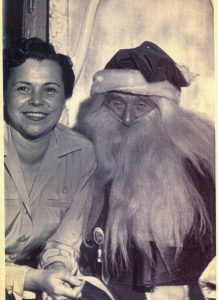 My Mom and Santa Claus. Oh, my Mom is the one on the left.

I know my belated Mother’s Day blog won’t appeal to all my Readers? My target audience is Readers with Mothers. If you’ve never had a Mother, skip this part and go right to the Advice on Summer Movies.

I owe my Mom a lot. She gave me my sense of humor, my sense of  wonderment and curiosity, and a responsibility to stand up for what’s right.

We still have regular conversations, although they’re somewhat one sided now.

My Mom lived to be 93 and for most of those years she was full of life. She placed a high value on education and got her Masters degree when she was in her late 70s. In a wheel chair. I can’t imagine anything that would have stopped her from doing anything she wanted to do.

STAN: Is Goldberg  going to go on and on about his mother?
HARRIET: Well it is a blog about Mother’s Day.
STAN: Yeah, three damn weeks late, I might add. Besides, Goldberg’s Readers like to laugh, they like a great story, they like to learn something new. So far, sorry, this blog is just pure cr*p. Hey, did you see that? I tried to say the word cr*p, damn. he did it again.
HARRIET:  Well, this is a family blog, Stan. Now, let Jack finish.

My Mom had a wonderful sense of humor which I inherited along with some money. I appreciated getting both. She was also a bit of a rascal. Not a trouble maker, mind you, but someone who didn’t mind giving the world a little “oudgie” when it deserved it. That was another great inheritance from her.

Here are a few stories that showcase my Mom’s desire to always keep the world on its toes.

Ever since I can remember, my Mom didn’t get along with her youngest brother, my Uncle Donald. Don’t get me wrong. She wasn’t hostile or mean to him. She often loaned him money to help him out of a jam. But she thought her brother was lazy and stupid and she had no problem letting him know it.

After my Mom graduated college, she became a substitute teacher. One day she had to substitute for a history class my Uncle Donald was in. She called on Donald throughout the class, embarrassing him again and again because he hadn’t studied or done his homework (ever).

After class, my Mom wrote a note, sealed it in an envelope and told Donald to take it home to his Mother. If you’re following this story carefully, you’ll note my Mom and my Uncle Donald had the same mother, aka my grandmother.

Donald gave the note to his Mother, she read it and was steaming mad. There was no signature on the note, so my grandma demanded she go with Donald to school the next day to tell Donald’s teacher a thing or three. When she got to Donald’s class the next day, she saw her daughter at the front of the class.

“Berniece, did you write this note?” she asked.

“The one that said ‘Congratulations. Your son is a real record breaker. He is the dumbest person on the entire planet.‘ ”

“Why,” Mom said, “Do you have any more children you think would qualify?”

STAN: OK, not a bad story. But I don’t know why everyone makes such a big deal about Mother’s Day?
HARRIET: Don’t you remember some good things about your Mom?
STAN: (STAN MUMBLES SOMETHING INCOHERENTLY.) Fhdignet hobad mdtedh!
HARRIET: What? What did you say?
STAN: Fhdignet hobad mothar!
HARRIET: You “dignet” have a mother? Oh, You didn’t have a Mother! Of course not, Stan. Of course not. That’s what I’ve been telling you. You’re not real. You’re just something, well, that Jack dreamt up to make the blog more interesting,

NOW STAN’S FEELING ARE REALLY HURT. IT WAS BAD ENOUGH THAT HE NEVER HAD A MOTHER, BUT NOW HARRIET HAS CONVINCED STAN HE IS JUST A CHARACTER INVENTED TO MAKE THE 10 MINUTES OF BRILLIANCE BLOG SEEM MORE INTERESTING.

STAN: That’s it, Harriet! I’m outta here! I QUIT! I want off the blog. It’s obvious I’m not important to anyone.
HARRIET: No, Stan, no. You’ve got it all wrong. You’re very important to Jack. He never writes a blog without you. To Jack, you’re practically his leading man. His hero. The one everyone looks up to. In fact, Stan, Jack thinks “You’re the Tops.

WITH THAT COMMENT, HARRIET BREAKS INTO SONG, SINGING COLE PORTER’S YOU’RE THE TOPS

What? Celebrate Another Mother’s Day. It must be a Hallmark plot!

When I first heard about ANOTHER MOTHER’S DAY, I was pretty sure it was just a plot by Hallmark Cards to get us to spend another $18.6 billion dollars celebrating Mom. But it’s actually a brilliant idea.

Another Mother’s Day is a not-for-profit organization that encourages people to honor a Mother other than their real Mother. At this site, they tell stories of how some mothers spend their entire existence just to put food on their table (A stupid comment by this writer, since most women in Darfur don’t even have a table!) 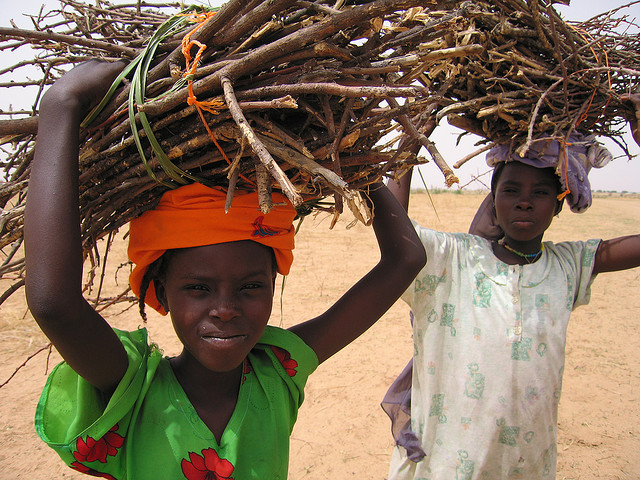 Darfuri women spend the greater part of their existence trying to feed their families.

In the largely barren land of Darfur, women must walk up to seven hours a day, three to five times a week, just to find a single tree with usable firewood. They  lose more than a thousand hours each year they could be learning, earning a living, or raising their children. Outside the relative safety of the displacement camps, they are vulnerable to acts of violence and sexual assault. The danger is so great that, in order to avoid leaving the camp, many women pay for fuel by selling some of very food they hoped to cook.

HARRIET: Wasn’t that a touching story, Stan? You know, a mother’s love for her children is the strongest force in the Universe. It’s stronger than Hate, Greed or Power!
STAN: I guess so. But I still don’t see how it relates to me. I’ve never even had a Mother.
HARRIET: Well, you might one day, Stan,  you never know. Maybe Jack will write your Mother into this blog.
STAN: Never happen Harriet. It’ll never happen in a million years.
HARRIET: Well see, you never know. (HARRIET WINKS AT THE READERS, LETTING THEM IN ON A LITTLE SECRET. 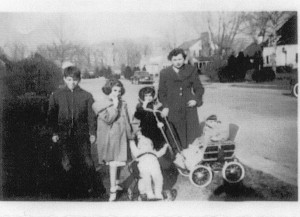 My Mom around 1950, with two of my three sisters, some Eddie Haskel type neighborhood kid and why, yes, that little blogger in the baby carriage is me.

Funny Story #2 about my Mom

When my middle sister, we’ll call her Rainy, because that’s her name, was 7 years old, she climbed into my crib and got her leg stuck in the slats. Rainy screamed for help and my Mom came running. “Don’t worry, Lorraine, I’ll get you out.” With that, my Mom ran out of the room. A minute later she returned with Old Joe, a neighborhood handyman. Old Joe was carrying a big rusty saw.

My sister Rainy screamed, ” What’s he gonna do Mom, cut off my leg?”

My Mom replied, “Well you don’t think I was going to ruin a perfectly good crib, did you?” 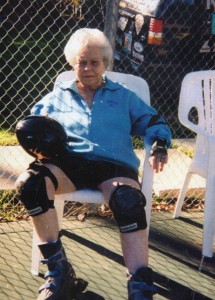 My Mom, the Roller Blader. She wasn't realy Roller Blading. My sister was at a park, saw my Mom near a Roller Blade outfit and convinced her to put it on.

My oldest sister, JoAnn, had an engagement party in New York at my brother-in-law-to be’s apartment. Both families were equally represented and it was the first time anyone other than my sister and my soon-to-be brother-in-law ever had both families in the same room.. Throughout diner, my sister’s inlaws bragged about this book and that book.. And this author and that author. This went on all evening, hardly giving anyone else a chance to talk.

My Mom was an avid reader and had no doubt had read every author brought up that night. Finally, during dessert, my Mom had a chance to speak. Rosalie, my broter-in-law to be’s mother asked my Mom, “Do you like to read?”

“No, Rosalie,” my Mom answered, “we don’t really read books in Baltimore. But we sure like to f*ck.”

Of course, my Mom, forgetting her manners for a moment, didn’t use any asterisks to express how she was feeling. My Mom was quite a character.

ALL OF A SUDDEN, OUT OF NOWHERE, THERE IS A KNOCK ON THE BLOG DOOR.
SFX: Knock. Knock.
STAN: I didn’t know blogs have doors!
HARRIET: Shut up, Stan, give Jack some creative license, please. Well, aren’t you going to get the door?
SFX: Door opens
STAN: Yes, how can I help you?
STAN’S MOM: Stan.
STAN: Yes?

STAN HAS NO IDEA WHO THE WOMAN IS WHO IS STANDING INFRONT OF HIM.

STAN’S MOUTH DROPS OPEN. HE CAN’T BELIEVE WHAT HE IS HEARING.NO, REALLY, HE DOESN’T BELIEVE IT COULD BE POSSIBLE

STAN: Are, are you sure you’re my Mom? My real Mom?
STAN’S MOM: Of course, Stan, I ought to know my own son shouldn’t I.
STAN: B-but, how are you so sure?
STAN’S MOM: Your favorite food is crepes. You hate asparagus. And the only time you drink beer is when you’re having hard shell Maryland crabs.
STAN: Hard shell crabs?
STAN’S MOM: Yes, with Maryland Old Bay seasoning.
STAN: How do you know all that?
STAN’S MOM: I’m your Mother, Stan. Look, if you don’t believe me, just look over here to the right.
STAN’S MOM POINTS TO THE SIDE OF THE BLOG, WHERE JACK HAS CLEARLY IDENTIFIED THIS NEW WOMAN IN STAN’S LIFE AS HIS MOTHER.

STAN: It’s true. You are my Mom. God, this is the happiest Mother’s Day in my life.
STAN’S MOM: Well, actually, Stan, it’s three weeks after Mother’s Day.
STAN: Not to me, Mom. From now on every day is Mother’s Day.
STAN’S MOM: Hey, how come you didn’t send me a card on Mother’s Day? No card. No gift. No phone call. And when was the last time you cleaned up your room? Or took a bath? Ate your broccoli? Or visited your grandmother?

STAN IS ALL SMILES.
STAN: Listen to her. She’s only been my Mom for five minutes, and she’s already driving me crazy.
STAN’S MOM: I love you Stan.
STAN: I love you too….Mom!

If a movie trailer says, ” Funniest movie of the year,” it isn’t.

How to make a million dollars on the Internet!

Don’t answer ads that say, “How to make a million dollars on the Internet!” (This quote belongs to Seth Godin, the most brilliant marketer on the Internet….when I’m not around.)

This man (below) is really thinking “Outside the Box!”

Well, it’s almost time to say good-bye. Sorry it took me so long to get this blog up. The next blog won’t be about my Mom, will be more interesting and I won’t wait so long to post it. Don’t forget to leave a comment. Aren’t you happy Stan finally got a Mom to call his own? 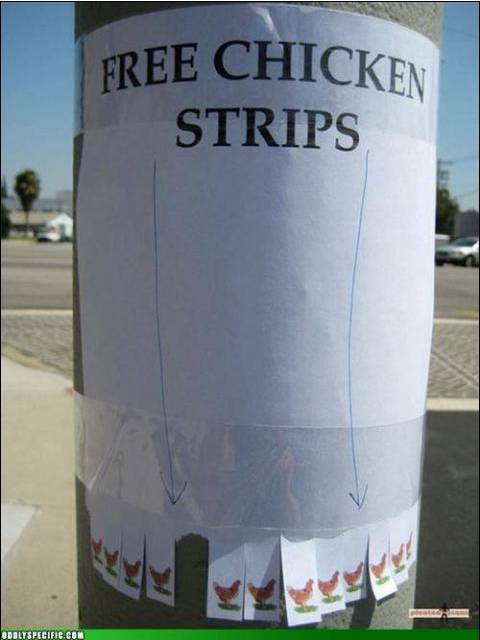 Well, they didn't lie, did they? 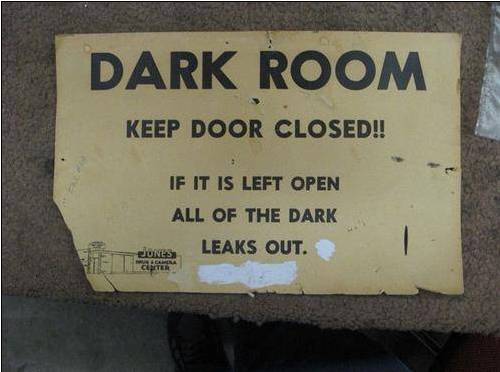 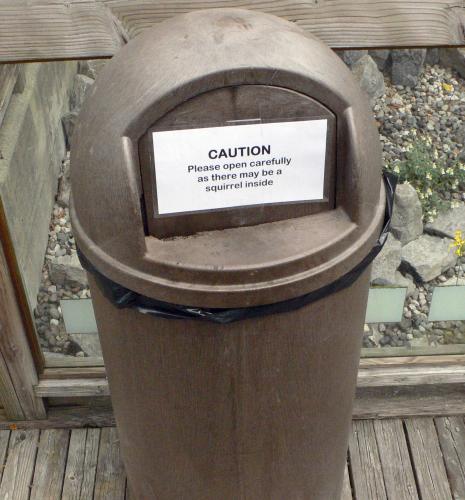 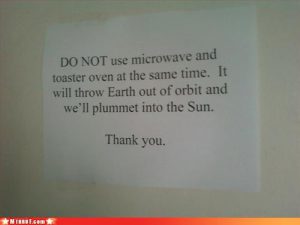 At least it's not a total ban. 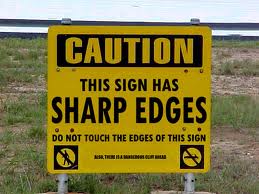 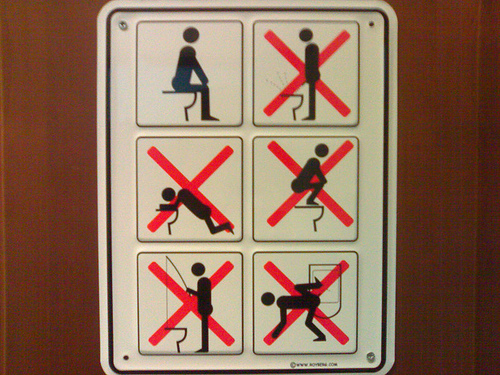 What? No fishing in the toilet? 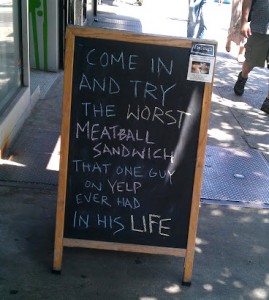 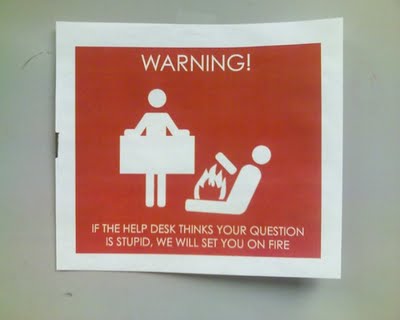 I'm not calling the HELP DESK. You call them!