Damn, I sure hope my brother-in-law doesn’t read this blog

But lately, it seems like many funny commercials aren’t very memorable. It’s because the “funny” doesn’t relate to the brand.

As a Copywriter and a Creative Director, that’s something I think about a lot.

I’m much more strategic than I am creative.

The first commercial I wrote when I was 23 showed a man diving into a swimming pool full of potato chips. Then the announcer says, “Snyder’s Potato Chips. Great for a dip.”

Funny. Memorable And it sold a ton of potato chips. Specifically, Snyder’s. It even won the World’s Best 10 Second Commercial from the Hollywood Television and Film Society.

HARRIET: I love it when Jack does that?
STAN: Does what?
HARRIET: He brings up cool things he’s done without making it seem like he’s bragging.
STAN: Damn, I wouldn’t call Goldenbergerwitz clever. I think he’s just sneaky. In fact, I thing Goldenstein’s a sneaky bast*rd.
HARRIET: But Jack does it with such finesse. He does the same thing again later on in the blog.
STAN: How do you know what happens later? The blog just started.
HARRIET: Oh, Jack always send me an advance copy before he posts it.
STAN: How come you rate?
HARRIET: Girlish charm, I guess.

Sorry, I got distracted. Where was I? Oh yeah, I was talking about commercials that are funny, but not very effective. People remember the ad, but not the product. Or as my friend and advertising mentor, Al Hampel, used to say, “It’s not creative unless it sells.”

In this spot for Volkswagon Beetle, it appears that a man wearing a ski mask is up to no good when he picks up a few snacks at a convenience store.

The “joke” is that he just came back from a day of skiing and forgot to take off his ski mask. Consequently he looks like a robber. So he and his buddies ride off in their Volkswagon Beetle having scared the living daylights out of the shopkeeper and one of his patrons.

It’s funny, well acted and well shot, but you wind up remembering the commercial, not the brand. Here. Watch. You’ll see what I mean.

STAN: I did it. I did it. I just proved Goldberg wrong. He said I wouldn’t remember the name of the advertiser. It was Volkwagon, right?
HARRIET: Well, yeah, Stan. But he told you that in the last paragraph.
STAN: So? What’s your point?

It doesn’t do a product any good if you remember the commercial and not what’s being sold. Now, I’m not saying that spot still doesn’t have some merit, because it’s funny enough it could go viral.

If you saw the Volkswagon spot (without my setting it up for you!), you might go into your office the next day and say,”Man, I saw this great commercial last night.”

“Yeah, what was it about?,” says a coworker you’re sleeping with.

You’d tell the co-worker you are sleeping with, “A shopkeeper thinks he’s about to get hit with a hail of bullets and blown across his convenience store by a would-be robber. Turns out, the guy just forgot to take off his ski mask. Then, he and his buddies leave the scene of the ‘non-crime’ before the cops show up.”

“That sounds pretty funny,” replies the coworker you’re sleeping with. Then she asks, “Who was it for?”

“Damn if I know. Maybe Doritos. Or some snack food company,” you reply.

Commercials can’t just be creative. They also have to be strategic and memorable.

Her’s an example of one that works. This spot for TNT cable is hilariously funny, wonderfully inventive AND you’ll remember who it was for. And not just because I told you ahead of time!

See how the creative idea of the spot leads you directly to the brand. That’s why it works.

(Spoiler Alert: the advertiser reveals who it is even before you click on the spot. They weren’t taking any chances. But they didn’t have to do that.  See if you agree.

Married Women Reveal What They Really Think About Their Asses

In a recent research study, married women revealed the following about their asses:

30% of married women think their ass is too fat.

18% of married women think their ass is too skinny.

And 52% of women are perfectly satisfied with the man they married. 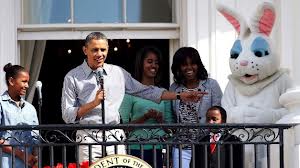 Dressed as the Eater Bunny, Mitt Romney made a rare public appearance at the White House Easter Egg Hunt last March. After posing with President Obama and his family for a photo op, the former presidential candidate joined the 5-12 year olds hunting for eggs. Romney didn’t do bad, either. He found 23 eggs and the afikomen. Who knew?

Meditation and the Light Inside You

STAN: Oh, God! Oh, God! Here he goes.
HARRIET: What? What are you talking about?
STAN: This is the part I hate. The part where Goldenbergerstein sticks in some of his high fallutin’ metaphysical crap. He just sneaks it in the blog right between the jokes. He thinks Readers won’t notice.
HARRIET: And knowledge scares you, Stan?
STAN: When it’s something I don’t about, yes.
HARRIET: Grow up, Stan! You just might learn something.
STAN: I doubt it.
HARRIET: You know, Stan………I doubt it too.

Meditation is the process of exploring Inner Space.

It’s based on the principle that the Inner World, the world inside you, is as vast and infinite as the Outer World.

By exploring Inner Space, we can gain tools that enable us to be much more successful in the Outer World.

You see, as children, we spent so much of our lives trying to master the Outer World that by the time we’re adults, it’s no wonder we’re strangers to our Inner Universe.

There’s a light inside every human.

It’s not material, of course, but it is there just the same. The light is always on, but we must be open to seeing it.

HARRIET: Stan, what the Hell are you doing?
STAN: Oh, I’m sorry. I was just checking for your Inner Light.

Meditation makes it possible to see that Light and be guided by it, illuminating our path on the Inner and the Outer Worlds.

I would ask God for a Jaquar XK-E, but I know God doesn’t work that way. So, I think I’ll steal an XK-E and ask God for forgiveness.

If I agreed with you, we’d both be wrong.

Dolphins are so smart. Within a few weeks of captivity, they can train people to stand on the edge of a pool and throw them fish.

Whenever I fill out an application, in the part that says, “In an emergency, notify:” I always put “DOCTOR”.

I didn’t say it was your fault. I said I was blaming you.

War does not determine who is right. Only who is left.

You don’t need a parachute to skydive. You only need it to skydive twice.

To be sure of hitting the target, shoot first, then call whatever you hit the target.

Nostalgia isn’t what it used to be.

And finally… I used to be indecisive. Now I’m not so sure.

That’s it. Thanks for stopping by Readers. You know, it wouldn’t kill you to leave a comment just so I know you were here.

All right, that’s it! Next time I’m taking attendance.