Today’s blog has Something for Everyone. Well, everyone but itinerant Gypsies and people named Lipshitz (I hope to have something for them next blog!)
If you stick around long enough, you’ll encounter:

The first story on my blog is very important. Well, not to you. To me. It’s important to me that I make it important to you. Otherwise, you won’t stick around.

If my first topic isn’t funny or brilliant or in some ways captivating, you and other Readers will fly the coop, hightail it out of town, head for the open road, well, you get the idea.

STAN: How ironic. He left out “Hit the Road, Jack! Every time Goldberg writes this cr*p, I just wanna, “Hit the road, Jack!”
HARRIET: Chill, Stan. Give Jack a chance. He’s got new Readers he’s trying to impress. It doesn’t look good if you continue to badmouth him. Besides it’s his blog. You’re just a character he made up.

Now I must admit I wasn’t quite sure whether I should start today’s blog with an Explanation on How Life Works or a Talking Dog joke. As you know, both are equally compelling.

Considering the intelligence and maturity of some of my Readers (Stan comes to mind), I felt I couldn’t miss with a Talking Dog  joke. But on the other hand, this is, after all, 10 Minutes of Brilliance and the majority of my Readers, you included, ARE quite brilliant! So I decided to take the high road.

Now to be transparent…

STAN: I can see right through that.

To be transparent, I should state that I didn’t write this metaphoric gem on How Life Works. The author is Portia Nelson, a renaissance woman. author, singer, composer, lyricist, painter, photographer, actress and current dead person. But she was alive and well when she penned this poem. The simple Universal Truth it unveils have been praised by psychotherapists, metaphysicians, and spread virally many times across the interconnected tubes  Al Gore to construct, in his basement, what we now know is called the “Internet.”

It is used in 12-step substance-abuse programs, and has been quoted in “The Tibetan Book of Living and Dying.”

No need for any more explanation. I’ve dubbed it: An Explanation of How Life Works, but you can just call it, “There’s a Hole in My Sidewalk.”

There’s A Hole In My Sidewalk by Portia Nelson

I walk down the street.
There is a deep hole in the sidewalk.
I fall in.
I am lost… I am helpless.
It isn’t my fault.
It takes forever to find a way out.

I walk down the same street.
There is a deep hole in the sidewalk.
I pretend I don’t see it.
I fall in again.
I can’t believe I am in the same place.
But it isn’t my fault.
It still takes a long time to get out.

I walk down the same street.
There is a deep hole in the sidewalk.
I see it is there.
I still fall in… it’s a habit.
My eyes are open.
I know where I am.
It is my fault… I get out immediately.

I walk down the same street.
There is a deep hole in the sidewalk.
I walk around it.

I walk down another street.

A man and a Taking Dog Walked into a Bar…

But I didn’t want to tell you any ol’ Talking Dog Joke. What if it wasn’t funny? I wanted to give you, my Readers, you’re money’s worth. And considering what I’m charging you, well…

STAN: Does he ever get right to the point?
HARRIET: Who? Jack?
STAN: Yeah, Goldenberger. Nah. He beats around the bush, runs it up the flagpole, then detours to Route 66. His writing style is somewhere between Stream of Consciousness ADHD and a Roller Coaster Ride to Hell.

Where was I? Oh, I remember, say, what are you doing now.  Let’s go feed the animals.

Nah, that’s not right. Wait, now I remember. I was talking about telling Talking Dog Jokes. I wanted to be sure you’d like it, so I told the joke to two of my neighbors’ dogs, Barney and Ruggles. 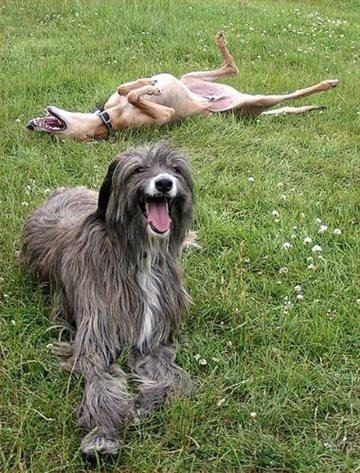 I told my Talking Dog joke to Barney and Ruggles, two neighborhood pooches. Ruggles (the dog in the back) really seemed to like it!

A guy is driving around and he sees a sign in front of a house: “Talking Dog For Sale.” He rings the bell, and the owner tells him the dog is in the backyard. The guy goes into the backyard and sees a Labrador Retriever sitting there.

The Lab looks up and says, “Well, I discovered I could talk when I was pretty young, and I wanted to help the government; so I told the CIA about my gift, and in no time at all, they had me jetting from country to country, sitting in rooms with spies and world leaders, because, well, no one figured a dog would be eavesdropping. Well, actually, all dogs eavesdrop. But as far as I know, none of them talk about it. For 8 years, I was one of the CIA’s most valuable spies.”

“But the jetting around tired me out and I knew I wasn’t getting any younger, especially in Dog Years. So I signed up for a job at the airport working for Homeland Security. I helped catch 5 bad guys including the notorious shoe bomber.

The guy was amazed. He goes back in and asks the owner how much he wants for the dog.

The guy says, “Ten dollars? That’s crazy! This dog is amazing! Why on earth are you selling him so cheap?”

“Because the damn dog’s a liar. He never did any of that sh*t.”

How to Write Great Advertising

Most ads don’t stand out. Nor do they motivate consumers to remember the ad campaign or buy the product.

So how do you write great advertising? The best answer I could find (not counting my own work, of course,) comes from new age guru, media darling and Leader of the Conversation, Seth Godin.

If you’re in marketing, publishing or, Hell, if you live on Planet Earth, you should know who this veritable genius is (He’d NEVER call himself that). Here’s his take on how to write something, great advertising, for instance, and stand out from the crowd.

If your writing feels like nothing but easily defensible aphorisms, as if you’re saying things that are obvious, it’s entirely possible that no one is going to eagerly keep reading. Your real estate brochure or the ad copy you’ve written–if it’s merely posturing or bragging, better to not say it at all. We already know you think you did something great.

Consider the alternative. Say the opposite. That your condo isn’t right for everyone. That your software might be overpriced. That this new model car is in fact quite difficult to use.

And then tell us why. We’d love to know how you’re going to wriggle out of that. And along the way, if your story is a good one, we might even give it a try.

How One Lone Dancing Nut Leads a Peaceful Revolution! And why the First Follower is the Spark that Lights the Flame.

I like to provide my Readers with cutting-edge information. Because after all, I have a pretty intelligent and eclectic set of Readers. Over 8,000, at last count. And every one of them is more intelligent than the average Tom, Dick or STAN.

STAN: Hey, I resemble that.

So, since I never know what my Readers will be up to next,  I thought I’d provide you with some general information on How to Start a Revolution. Now at first glance, this video of the Lone Guy Dancing looks pretty stupid. In fact, it looks just as stupid on the second and third glances, too.

But the copy, what the voice over announcer says, THAT is absolutely brilliant.

STAN: So, Mr. Fathead Goldbergsteinawitz, I guess you wrote the brilliant copy.

And no, I didn’t write the copy. If you know who did, let me know.

By the way, this video points out that it’s not just the Leader who starts a Revolution. (That’s Good News because we can’t all be Leaders.) It’s really the First Follower who transforms the Leader from being a Lone Dancing Nut into the Leader of the Pack.

I don’t think this was a planned Flash Mob. I think it evolved naturally because of one Lone Dancing Nut (aka The Leader) and one courageous First Follower who had the Courage to jump in and encourage others to follow.

How to Really Tick People Off
This next piece follows in the footsteps of a blog I wrote about a year ago, Goldenberg’s 10 Rules of Spectacular Failure.  In the blog, I taught people how to FAIL. And why not? Everybody and their mother were teaching people how to SUCCEED, but I march to a different bongo player.

So if you want to win friends and influence people, read Dale Carnegie. But if you want to learn how to really tick people off, well, read on.
Meistro, cue the band, Presenting..

1. Sit in your front yard, point your hair dryer at passing cars and try to slow them down.

2. Staples papers in the middle of pages.

3. Holler random numbers when someone is counting.

4. Highlight irrelevant information in online scientific journals and email them to your boss.

5. If you have a glass eye, tap on it occasionally when talking to others.

6. Ask people what gender they are. Then say, “Are you sure?”

7. Set the copy machine at work to reduce everything 200%.

9. In the memo field of all your checks, write “For sexual favors.”

10. Reply to everything someone says with, “That’s what you think!”

11. Finish all of your sentences with the words, “in accordance with prophesy.”

12. Repeat the following conversation a dozen times very loudly.
“DO YOU HEAR THAT?”
“What?”
“Never mind. It’s gone now.”
13. Every time you begin a new sentence, bob your head up and down like a parakeet.

14. Go to a poetry recital and after every poem, ask why the poem doesn’t rhyme.

15. Make beeping noises when a large person is backing up.

Okay, Frogie! that’s all she wrote. Well, that’s all I wrote, anyway. So what was you favorite part of today’s blog? The Talking Dog joke? The One Lone Dancing Nut story? The Explanation on How Life Works? Let me know. Leave a comment.

STAN: He so damn sneaky, that Goldberg. He writes these pathetic questions trying to trick Readers into leaving a comment. Like any of his  Readers really care.
HARRIET: Stan! You’re incorrigible!
STAN: You can compliment me all you want, Harriet, I’m still not sleeping with you?
HARRIET: No?
STAN: No, really! Now, I wouldn’t mind having a little sex with you.
HARRIET: That’s a bout what it would be , Stan, that’s what it would be.
STAN: I don’t get it.
HARRIET: Now you’re getting warmer. Good night, Stan.
STAN: Good night, John Boy.