When I wrote my last blog, Liar. Liar. Republican Pants On Fire. Again., I really let the Republicans have it for their mis-truths, half truths and outright lies they’ve spread about the Affordable Care Act, aka Obama Care. And I was careful to say that Obama Care was a far from perfect bill. But I wouldn’t be fair to my Readers if I didn’t express equal indignation when the Democrats , or rather, one particular Democrat, transgresses. Especially when he was claiming to be a newly righteous man. 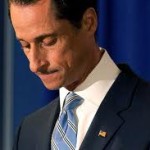 Anthony Weiner, aka Carlos Danger, the name he used to sext online

On Tuesday, candidate for NY Mayor and Democrat Anthony Weiner tried to camouflage the fact that he lied when he lied. But the facts bare out that he did something nasty, wicked, ugly, immoral and just downright stupid AGAIN. It’s just too much to bear because he did it at the same time he was claiming his sordid behavior was behind him. And he had the nerve to sorta blame it on his wife. He said he did it when he was “going through difficult times with his wife.”

The NY Times took him to task the very next day with an editorial, Mr. Weiner and the Elusive Truth where they stated, “A mayoral candidate’s sexting scandal hasn’t gone away, but he should.” It’s ceratainly bad enough when someone’s behavior violates another person, but Weiner has violated the entire NY electorate. 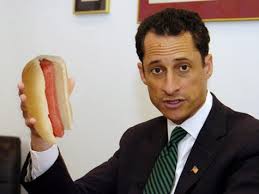 A candid photo of Weiner and weiner. After all, we are an all-family blog!

When his first sexts (Damn, they’ve even got a word for it) were revealed, Weiner proclaimed it wasn’t him, blaming it on someone hacking his Twitter account. At one point he even blamed it on Al Qaeda. (Really, I’m not making this up.) Then he tearfully apologized, resigned from office, and retreated into his privates. I mean, private life.

Oops, sorry. As a blogger who prides himself on raising the bar when it comes to humor, it’s hard not to take the easy way out and go for the cheap laugh every time Weiner’s name pops up in the news.

Case in point, the last part of the previous sentence had 2, count ’em, two double entendres.

STAN: Wouldn’t that be called a quadruple entendre?
HARRIET: You oughta know Stan, you’re a quadruple idiot.
STAN: Look, Harriet, if you’re just trying to compliment me to get me in bed, it won’t work.
HARRIET: It won’t.
STAN: Well, yeah, sure, OK, maybe it would work.

I’ve always believed in rehabilitation. Drug addiction is a disease that needs to be treated, not incarcerated. And there’s no better support for rehabilitation than what we don’t do with our overgrowing prison population. With little or no rehabilitation of our nation’s prisoners, it’s no wonder the vast majority of people in the hoosegow (look it up Foreign Readers) come back for a return engagement.

Prison is so prevalent, we’ve come up with myriad names for it:
The big house
Up the river
The slammer
Jail
The hold
The lockup
The jug
The nick
The brig
The can
The pokey
Stir
Penitentiary
The pen
The click
The cooler
And the joint

STAN: Isn’t Goldenrod a little off topic here? I mean, he started with a rant about Anthony Weiner and now he’s knee deep in prisons. Er, prison names.
HARRIET: A poor choice of words, Stan, but yes, you are right for once. It’s just Jack’s ADHD kickin’ in. He’ll be back on track quicker than you can say…

Say, where was I? Oh, I remember now. While I do believe people should be given a second chance, when you lie about your mistakes and say your past is behind you, but it really isn’t, you can’t keep asking for forgiveness. Well, you can, of course. But you don’t deserve it.

Anyway, that’s all I want to say about Anthony Weiner (aka online as Carlos Danger.). He doesn’t deserve any more electronic ink.

So now, as Monty Python used to say, it’s time for something completely different.

Apple. Blueberry. Lemon Meringue. Everybody loves a good piece of pi. Here are some pie charts that explain, well, just about everything.

HARRIET: I thought that pie chart was sexist.
STAN: So, you wanna make love?
HARRIET: No, Stan, you dufus. I said sexist, not sexual. There is a difference.
STAN: I know that, Harriet! I’m not stupid.
STAN: So, do you wanna have sexist?

All right, it’s time to brighten up today’s blog a little, and there’s no better way to do that than to bring in a little song and dance.

I’m always impressed by spectacles and true determination. This video by Matt Harding is brilliant in both respects. Yiou don’t have to be a dancing fan to appreciate what it must have been been like to dance with thousands of people in 40 countries in cultures all over the world. Enjoy “Trip the Light.”

My friend and former college roommate Tony sends me some of the coolest things on the Web. You might remember the incredible pictures from Tony’s back yard (Scroll on link to see them.)

Now I’m generally not a fan of pet videos, they’re just so commonplace on the Web that I’ve never wanted to waste my Readers’ valuable time. On the other paw, when I saw videos of Jumpy the Dog, I thought they were cool enough to share.

If you’ve ever had a dog I’m sure you’ve taught him the standard 5 “any dog can do ’em tricks. You know: Stay. Sit. Roll over. Lie down. And play dead.(Wow, strikingly similar to conversations I used to have with my first wife!)

Speaking of Dog Death, my favorite pooch growing up was called Alfonse Demato (not his real name). I used to love little Alfonse (still not his name) so much. He’s been dead for over 50 years which is 350 years in Dog Death.

Well, Jumpy the Dog (see below), has his own pretty impressive resume of tricks he can before like skateboarding, diving off a diving board, riding a scooter and water skiing. He does the “many dogs can do it” catching of a Frisbee, but he does it flipping up in the air and over backwards.

Anyway, here are some of the cool things Jumpy the Dog can do.

Thanks, for stopping by today, Readers. I had wanted to publish my ACTUAL PHOTOS OF ALIEN SPACESHIPS that I caught with my iPad when I was in Bmore (Baltimore) Maryland, but I wanted to post this blog on Anthony Weiner now because the topic was in the news. come back next time for some cool New Product News. And please, please, please leave me a Comment even if you have absolutely nothing to say. It helps me with Google search engines when you post a comment. That it turn, gets me more Readers and that makes me Happy. You want me to be Happy, don’t you?

Adios, for now, Readers. Come beck next time when we will showcase some cool New Products.  Jack

STAN: Goldberg said the same thing twice.
HARRIET: Well, sometime he forgets.
STAN: Maybe it’s time for a younger man to take over the blog. I wouldn’t forget.
HARRIET: You wouldn’t forget what?
STAN: What?