STAN: He does that a lot.
HARRIET: Who does what a lot?
STAN: Goldenbergstein. He starts out on one topic, then drifts off into something else. 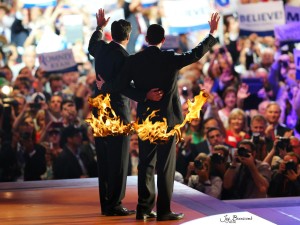 At a recent rally, the trousers of two Republican Senators suffered spontaneous combustion when they began a speech with, “You can trust us. We’re Republicans.” (Image from Jay Branscomb)

Oh, I remember now. I’m flaming mad at Republicans. Again. Not that the Democrats are a party to text home about. Both parties suck when it comes to doing the job they were elected to do. Namely, representing their constituents AND proactively promoting the life, liberty and pursuit of happiness of all Americans.

I do think Republicans have earned one award for leadership. They are the biggest liars on the face of the Earth! Case in point? What they’ve been saying about the Affordable Care Act Act, also dubbed ObamaCare by our “fiends across the aisle.”

It turns out that five states who have studied ObamaCare carefully think it will bring healthcare costs down. Just what it was meant to do.

Now I’m sure you’ve heard terrible things about ObamaCare. About how it was going to ruin healthcare in America. Forever. I’ve heard it so many times, I started to believe it.

Ever since President Obama’s Day One, January 20, 2009, the Republican leadershi* has done everything they could to wreck every proposal supported by the President. Not that all the things Obama and Democrats proposed were all good for America, mind you. You don’t have to be a student of political science (an oxymoron, for sure) to realize that politicians of BOTH political parties care about one thing above all else. And it isn’t the American people. It all about getting re-elected. Everything else be damned.

It wouldn’t matter if the President said, “George Washington was the first president of the United States,” Senators Lindsay Graham, Mitch McConnell and that ditsy lady who was Governor of the Eskimos would call on their Republican brethren and sisteren to “denounce the bald-faced lies emanating from Oval Office.”

STAN: Harriet, don’t you think we should do something about it?
HARRIET: About what? About the fact that the Republicans are bigger liars than the Democrats?  I think it’s a little late for that.
STAN: No. No. About the fact that Goldberger…
HARREIT: Goldenberg, Stan, Jack Goldenberg. (HARRIET CORRECTS STAN.) The least you can do is get the name right of the man who created you. After all, you’re just a Fig Newton of his imagination. (Let the foreign Readers try to figure that one out.)
STAN: Goldberg. Goldenberg. Whatever? If Goldenbergowicz doesn’t get to the point soon, his Readers will have to go somewhere else for their eight Minutes of Brilliance.
HARRIET: Ten minutes.
STAN: Whatever.

But let me get to the point. The danger in hearing all the lies and venom spewing forth from the Grand Old Party, a k a, the Republicans.  is that you hear something so many times, it starts to ring true. 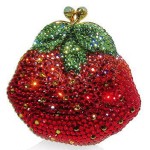 Here’s my evidence, members of the jury. The Affordable Care Act. The national law that, among other things, gave all Americans a healthcare plan that prohibited insurance companies from considering preexisting conditions and protected American wallets and Judith Leiber pocketbooks from catastrophic illnesses.

It’s safe to say, you haven’t heard much that is good about the Affordable Care Act. Republicans said it would destroy US healthcare as we know it, bankrupt companies, and send healthcare costs so sky high, only those buried in the ground would be able to afford it. 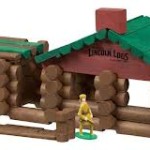 Honest Abe was a great Republican President, but even he misspoke from time to tine, His claim to have grown up in a house made entirely of Lincoln Logs just doesn’t ring true.

In a front page story in yesterday’s  New York Times  (that’s right Republicans, the NY Times!), it was reported that the cost of individual health care plans for New Yorkers under the Affordable Care Act will be 50% less than they are today.

What? What? Fifty percent less? How is that possible? How could it be? Is this just another half truth, mis-truth on out and out lie promulgated by Barack and Crew?

No, it is true. To quote the NY Times:

“State insurance regulators say they have approved rates for 2014 that are at least 50 percent lower on average than those currently available in New York. Beginning in October, individuals in New York City who now pay $1,000 a month or more for coverage will be able to shop for health insurance for as little as $308 monthly. With federal subsidies, the cost will be even lower.

Supporters of the new health care law, the Affordable Care Act, credited the drop in rates to the online purchasing exchanges the law created, which they say are spurring competition among insurers that are anticipating an influx of new customers. The law requires that an exchange be started in every state.” 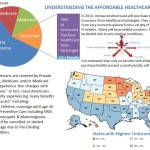 The Affordable Care Act is not the monstrosity many Republicans believe it to be. There are many good provisions in it. Also, some bad ideas added by pork barrel Republicans AND Democrats.

And New York isn’t the only state to report that healthcare costs will go down once the Affordable Care Act goes into effect and competition starts to rule the marketplace. Four other states have also reported they expect the costs for individual healthcare insurance will drop as competition increases. Many other states, fearing the worst, haven’t even looked into the possibility that healthcare costs may go down. they may be surprise at what they will find.

Republicans been saying all along that  the Affordable Care Act is the worst thing to hit America since sliced rotten bread. Republicans warned that the new healthcare act would threaten the country with sky-high healthcare costs so prohibitive, only rich Republicans could afford it. 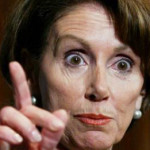 Nancy Pelosi, the former Squeaker of the House

This next paragraph is not totally true. The new few paragraphs after it will explain why.

Now, of course, I would be remiss if I left my Brilliant Readers with the impression that the Affordable Care Act doesn’t have some provisions that may be more harmful than helpful. But whatever the failures of the bill, they all can’t be blamed on the Republicans. Democrats share the blame too, and no one is more of a culprit than the leader of the Minority Party in the House, the former Squeaker herself,  Nancy Pelosi, who actually had the nerve and stupidity to say: “But we have to pass the [healthcare ] bill so that you can find out what is in it.”

After I wrote the above paragraph, I decided to check out whether she could have really said that the House of Representative should pass the bill without reading it. She did. But only when you take it out of context is there anything wrong with what she said. Here, first watch how Fox News reported it:

OK, Pelosi did say what Fox News said she said, but only when you distort the truth of what she meant and take it out of context.

Here ‘s the TRUTH in context. It’s a little messy and hard to understand, that’s why it’s so much easier to believe what the Republicans want you to believe.

Republicans first said ObamaCare was all about abortion. When that didn’t take hold, they said it was about Death Squads who would soon decide who lives and who dies. When that was proved false, they said the bill would be a huge job killer.

Representative Pelosi knew the Affordable Care Act was about prevention and prohibitive preexisting conditions. She knew that since the bill would open up competition among insurance companies, costs would eventually go down.

Her comment about “passing the bill without reading it” was NOT meant to make the bill a law, only to clarify the truth of the bill, so that when the proposed bill reached the Senate, they would get a better idea of what the bill was about.

It a process called reconciliation where the Senate and House bills are compared so Congress can reach a consensus. Pelosi knew the House bill would never pass the Senate,. So she knew she needed the bill to pass so there was something to compare to the Senate bill.

Confused? Of course you are, and so am I. But that’s exactly what the Dirty Tricksters would want. Lies are much easier to accept when you don’t have all the facts.

And the Republicans and Fox News wouldn’t have it any other way.

OK, Readers you made it the end even thought today’s blog was a little short on humor.

STAN: Who are you calling a little short?

I had hoped to use today’s blog to show you photographs I took of alien spaceships landing in a field in Owings Mills, Maryland. And the shots I took of the alien family once they morphed into human form.

That will have to wait until next time.

Thanks for stopping by.