Hi, welcome back to 10 Minutes of Brilliance. I am very happy that… Hey, wait a second! Something’s different.! Somebody’s changed my blog!

HARRIET: Do you like it? I did a little Spring Cleaning.

STAN: Chill, Jack. Harriet was just using a figure of  speech. You should know that. You’re a writer.

I know I’m a writer, Stan. I write everything you say.

STAN: You do not.

STAN: I am not.
STAN SMILES AT ME KNOWING HE WAS JUST BEING STUBBORN WHEN HE SAID HE WASN’T STUBBORN.

What I don’t know is why you messed with my blog, Harriet?

HARRIET: I didn’t mess with it, Jack. I cleaned it up. Gave it some order. Before, everything was all over the place. And so were you. You’d start with one subject, then wander into another. It was like you had Attention Deficit Disorder and your stream of consciousness wouldn’t shut up.

Exactly, that was my strategy

STAN: You mean your strategy was to be disjointed and hard to follow.

No! Look, stay out of this Stan. I don’t need to be told what to do by an imaginary character I created.

HARRIET: Yeah, Stan. I can fight my own battles. Look, Jack, let’s try it this way just once.

But there are only 5 subjects.

HARRIET: Six, really, I dusted off the Pillsbury Dough Boy obituary from 2010 and put it at the end.

STAN: I agree, Goldberg. I’ve never liked any of your blogs anyway.

Table of Contents for Today’s Blog

STAN: You digress? Your digressions digress. Nothing new here. Move along folks. There’s nothing for you to see.

Where was I? Feeding the animals? No, hat’s not right. Oh, yeah. I was telling you about Apple’s Big News. Two of our best 10 Minutes of Brilliance Reporters have gone to great lengths to uncover the truth about the new iPhone 5s. 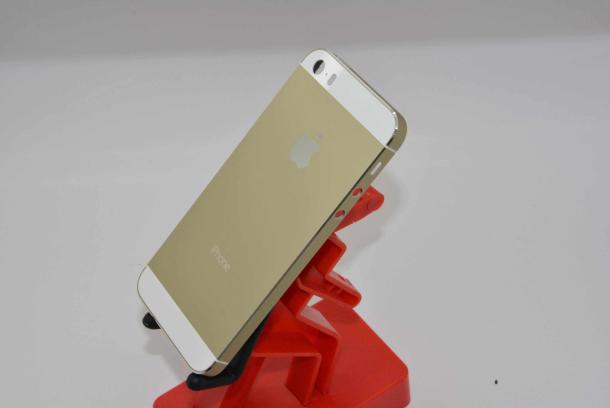 Here is what our intrepid reporters have found out:

It’s in the Bible: An iPhone for an iPhone

Apple’s new retail trade-in program, dubbed ” iPhone Reuse and Recycling Program,” has only three qualifications. The iPhone you trade in has to work (it must turn on),  you must purchase a new iPhone before leaving the store, and you have to have a current contract with a wireless carrier. Apple will pay you up to $280 (in credit for a new iPhone) and the prices they will pay will fluctuate. Trade-in values may go up or down in the future depending on supply and demand.

The 16GB iPhone 5 in good condition will have a trade-in value of about $250-253, a GSM 8GB iPhone 4 will bring $120-140 and the CDMA version will be worth about $80. But these trade-in values are significantly lower than current trade-in quotes being offered by competing services like Gazelle and NextWorth. Additionally, we’d advise you to see how well you can do by offering your old iPhone for sale on ebay or Craigs List.

Since the new iPhone 5S won’t be available until sometime between September 10-20, customers who want to trade in their old iPhone will have to settle for a gift card that can be used to purchase the 5S once  “the latest and greatest” arrives  inthe  store.

Weather News: The Tragedy of Rick Perry and the Destructiveness of Michelle Bachman

The National Hurricane Center started naming hurricanes after females in 1953. In 1979, men got equal rights and storms were named after them. And it wasn’t long ago that Global Warming was renamed Climate Change because so many Right-Minded Conservatives sullied the previous moniker. Certainly we’ve had hurricanes, tornadoes  and tsunamis before we wrecked, I mean, roamed the planet.  But evidence has shown the violent weather we’ve been having may be related to what we’ve done to Planet Earth.

That’s why this wonderful video makes so much sense. Let’s start naming hurricanes, storms and other natural disasters after people who’ve been denying climate change exists. The video is terrific. Enjoy. 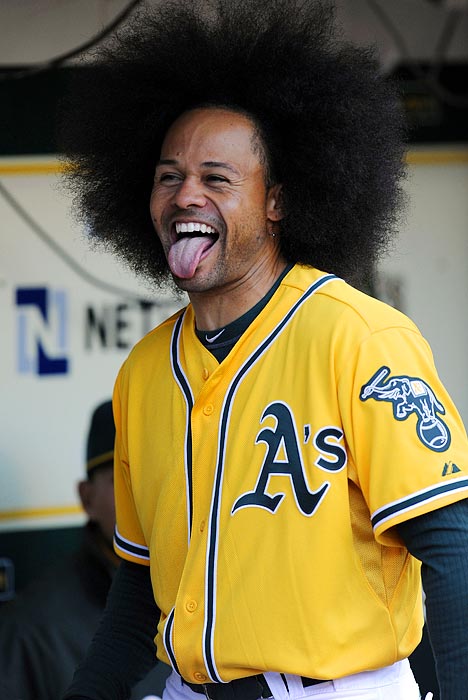 Coco Crisp, an outfielder for the Oakland A’s, is the only Major League Baseball player whose name sounds like a chocolaty breakfast cereal. There is no truth to the rumor he may be traded for Hot Chocolate with Marshmallows..

Ever since I was this big (I don’t know if you can see me, but I’m holding up 14 fingers), I’ve been coming to the quintessential trade show for cool things, the NY Gift Show, now called NY Now. Over 35,000 people from all 50 states and 80 foreign countries attended this year’s trade-only extravaganza featuring items for the home, lifestyles and, the reason I show up, gifts. The show is so popular, it’s held twice a year, in August and January.

In previous years, I’ve spent two-three days walking up and down the cavernous aisles of the Jacob Javits Center  on the West side of Manhattan scurrying past 2,000 vendors I didn’t have time to talk to so I’d have enough time to check out the vendors I did want to meet.. This year I could only spend 4 hours at the show, so I had to fly past 2,800 exhibitors slow enough to notice what was hot…and what was not.

10. Zoku Quick Pop Maker — With the beautifully designed Zoku Quick Pop Maker, you can make delicious ice pops in only 7-9 minutes. And to make sure they’re delicious, you should also consider buying the easy-to-follow recipes in the Quick Pop Recipe Book. You’ll be turning out such exotic flavored pops as spicy Mexican Chocolate Paletas, Watermelon Mint and adults-only Cucumber Mint Margarita Quick Pops. As my friend Bingo Wyer of Cote Fleurie Studio would say, “Yumm!” 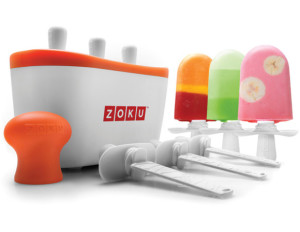 9. Custom Bobble Heads — Everyone knows someone it’s impossible to buy a gift for because “they already have Everything.”  Now custom Bobble Heads are a little expensive, but they’re so unique, they’re one-of-a-kind. And what’s more, there NO CHANCE the gift receiver will re-gift it (unless he/she has a twin or triplet)!

Bobble Heads have always been a little kitschy (all right, VERY kitschy). Well, custom Bobble Heads are even kitschier! You send them a couple photographs of the person you want to honor (or dishonor) and a month later you’ll have a one-of-a-kind gift for your one-of-a-kind friend. Prices start around $99.00.

Know someone getting married, having a Bar or Bat Mitzvah, or a convicted felon on Death Row?  Custom Bobble Head make a unique gift. (Wedding Bobble Head $198)

8.Mustachifier — It’s a pacifier. No, it’s a mustache. No, it’s the Mustachifier, the perfect gift for the new man in your life, as long as he’s a baby and as long as that baby has a sense of humor. Hey, look, babies cry all the time, they wet their diapers, spit up their food and they throw toys on the floor just to train you to pick them up. A baby is laughing at you all the time. Have some laughs on him and pacify at least one of his needs. 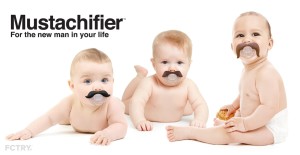 The Mustachifier is a fun gift for both baby and parents. ($9.99) 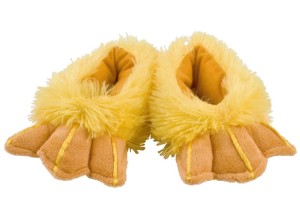 OK, they’re not for formal wear, but these Duck Feet Slippers for adults are even more fun if your kids have a pair.

6. Uncle Goose Blocks — Nobody has done more for classic wooden blocks than Uncle Goose. They’ve got classic alphabet blocks, foreign launguage blocks., presidential and nursery rhyme blocks and even blocks in Braille with sign language. The designs are gorgeous and the blocks will last for many generations. 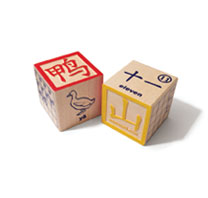 Chinese wooden blocks are beautiful and educational ($43) Other sets are as low as $24. 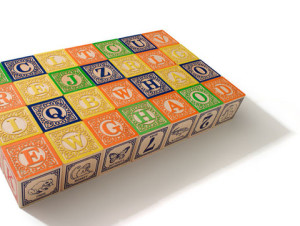 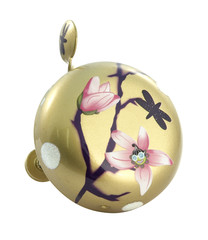 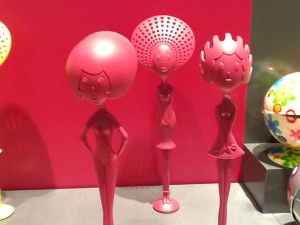 Pylones attractively designed ladle, skimmer and pasta spoon were a hot item at the NY Now Show. ($19.00 each) 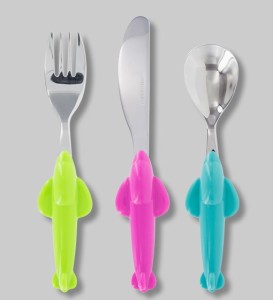 4. Mighty Purse by Handbag Butler — Fashion fuses with technology in the Mighty Purse. It’s an essential handbag accessory for women in the mobile computer age. It features a hidden, lightweight built-in battery that can recharge most smartphones including Apple, Samsung, Blackberry, LG and Android). It offers a charge -on-the-go for women on-the-go. Just to be sure, make sure it’s compatible with whatever device you’re using. 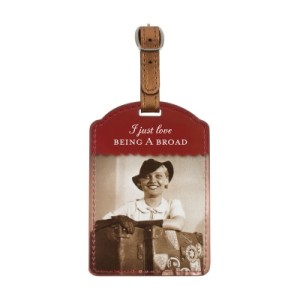 Everyone’s got baggage, so we might as well dress it up in style. This is one of a dozen beautifully designed Shannon Martin luggage tags ($10.50) 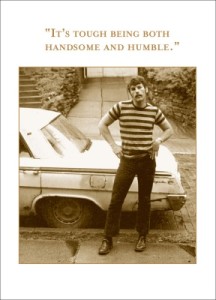 Shannon Martin’s card is perfect for someone who is handsome, but not that humble. ($2.95) Take that, Hallmark!

2. The Unemployed Philosophers Guild – The two inventive geniuses who run The Unemployed Philosopher’s Guild have cornered the market on cool and hip products. They’ve got wallets, mugs, mints, dolls, magnetic dress-up kits and much more and they all celebrate the better and lesser known celebs and historical figures like Elvis, Jesus, Davy Crockett, Darwin, Kurt Vonnegut, Andy Warhol, Jane Austen and many more. They’re great gifts for everyone, since everyone idolizes someone. Check out their web site to see their huge selection of pop culture gifts. 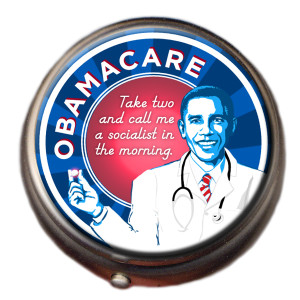 1. I Heart Guts — Wins Best of Show Award!  Artist and Designer Wendy Bryan used her BRAIN to make plush figures out of internal organs. They’re called I Heart Guts and they’re the perfect gift for someone with a HEART of Gold or someone who can’t STOMACH politicians. Do you know someone who has the  GALLBLADDER to challenge conventional wisdom.? These unique soft plush toys deserved the #1 gift designation from 10 Minutes of Brilliance. Urine for a treat when you gift the BLADDER. You’re sure to have a ball with TESTICLE and INTESTINE is the perfect plush for someone you know who’s  got guts. 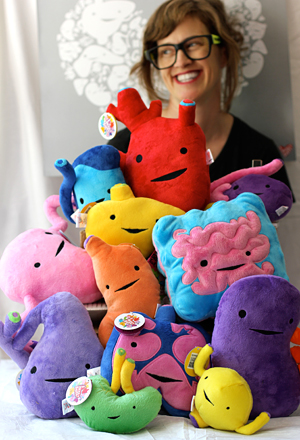 DYING NEWS: The Untimely Death of the Pillsbury Dough Boy

Hey there, Readers, sorry I was late. I was at a funeral. 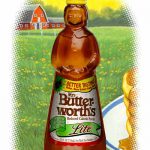 During the funeral, Mrs. Butterworth gave Pop N Fresh’s Dad, Pop Tart, a pat on the back. A pat of butter.

Please join me in remembering a great American icon – the Pillsbury Dough Boy, aka Pop N. Fresh. The veteran Pillsbury spokesman would have been 50 this year.

Sadly, the Pillsbury Dough Boy died yesterday from a yeast infection. Fresh was buried in a lightly greased coffin. 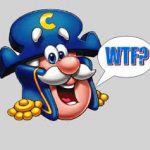 The Cap’n was not happy when only his head arrived at the funeral. The animators forgot to draw the rest of the body.

Dozens of celebrities turned out to pay their respects, including Mrs. Butterworth, Hungry Jack, the California Raisins, Betty Crocker, the Hostess Twinkies, and Captain Crunch. The grave site was piled high with flours.

Longtime friend, Aunt Jemima, delivered the Dough Boy’s eulogy, describing Fresh as a man who never knew how much he was kneaded. 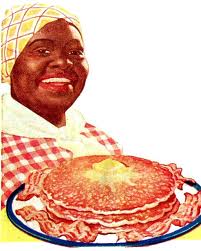 Aunt Jemima delivered the eulogy, along with some silver dollar pancakes.

Fresh rose quickly in show business, but his later life was filled with many turnovers.

He was not considered a very “smart” cookie, wasting much of his well-earned dough on half-baked schemes. Despite being a little flaky at times, he was a roll model for millions. Towards the end, after his sad demise, it was thought he would rise again. But alas, he remained unleavened. Like Matzoh.

He had a good temperament and very few things made him angry. Although he did get a little burnt up when someone would leave him in the oven.

The Pillsbury Dough Boy is survived by his wife, Play Dough, and two children, John Dough and Jane Dough; plus one little muffin in the oven. He is also survived by his elderly father, Pop Tart. The funeral was held at 350 degrees for about twenty minutes.

STAN: You didn’t write the Dough Boy’s Obituary, did you, Goldman?

Never said I did. In fact, if anyone knows who originated the Pillsbury Dough Boy’s Obituary, please let me know. I will check it out and attribute it now and the NEXT time the Dough Boy dies.

That’s it for today Readers. Thanks for the use of the hall. I appreciate your stopping by. Remember, do not under any circumstances leave a comment. That would only annoy STAN.