On Earth Day, 47 years ago, I was Head of the Earth! Really. Check with the UN.

STAN: Liar, liar, Goldenberg’s pants are on fire! I’m so mad, I can’t see straight.  I’m going to quit this gig and get a job on a real blog!
HARRIET: That would be tough, Stan. Did you forget you’re imaginary?
STAN: I don’t care, Harriet. I’m sick and tired of being the comic foil for Goldenberg on this blog. Did you see that outright lie he put in the headline? Head of the Earth? Hah, he couldn’t be a Head of Cabbage.
HARRIET: Look, I know Jack’s stories sound preposterous, crazy, almost impossible. But somehow they’re true.
STAN: Yeah, right!
HARRIET: Give him a chance, Stan. After all, he created you. You at least owe him that!
STAN: Oh, all, right, but I’m preparing my resume just in case.
HARRIET: OK. That seems fair.
STAN: You think there are any jobs on LinkedIn for fictional characters?
HARRIET: I bet there are a lot of fictional characters on LinkedIn. Now be quiet, Stan. I think Jack’s gonna explain himself.

You’re thinking I was just joking, maybe even lying, when I said I was once Head of the Earth.

Well it’s true. I was. And as far as I know, I was the first person to suggest that Earth Day should be an international event. 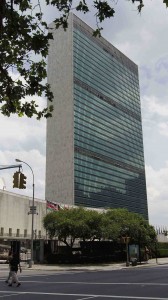 Up front, I’m not claiming I came up with the original idea for Earth Day. U.S. Senator Gaylord Nelson is credited with raising the environmental consciousness of the inhabitants of Planet Earth. The first Earth Day was held on April 22, 1970, and it was a huge success.

A year later, in 1971, an even more successful Earth Day was held, mostly in the United States, although not everyone who showed up on Earth that day actually attended the event.

But by 1972, many of Earth’s inhabitants were already tired of hearing about the environment. They viewed the first two Earth Days in ’70 and ’72, as a “Been There, Done That Twice” kind of deal.

However, I had the feeling back than that we hadn’t really solved all the Earth’s problems. (Good thing we’ve solved all those problems by now, huh?)

As I figured it, we still had a lot to do to tidy up the planet and put everything back where we found it.

So, I did the only thing a sane, sensible and caring person could do. I appointed myself Head of the Earth. I had business cards printed, stationary, the whole 43 million yards* (*circumference of the Earth x yards in a mile).

You might question who or what gave me the authority to become Head of the Earth. Well, the position was open. And there were no other applicants.

Besides, I was young and figured it would look great on my resume.

Green Marketing is here to stay

Next, like any great adman, I carefully studied the field I was about to enter. I wanted to learn all I could about the Earth, endangered species, plant life, pollution, green marketing, population control, water and energy conservation, recycling and the myriad efforts needed to Save Our Planet.

About an hour later, I figured I’d learned all I needed to know, so I called a friend of mine, a wonderful illustrator named John Safrit and asked him if he would design some new business cards an stationery for me.

“John, I’ve just been made Head of the Earth. Would you design some new business cards for me?”

“How many colors do you want on the logo?” John asked without acting like he heard anything out of the ordinary. John’s response was not all that unusual. Did I mention it was the 70s?

I was serious about helping Mother Earth. With the the third Earth Day fast approaching, I got busy announcing Earth Day International!

I produced ads that were run in free newspapers (Would someone please explain to Millennials what a newspaper is?) One of my favorite ads was headlined, “The Earth is a Mother.”

I got radio stations across the country to tell listeners about “The 100 Things You Can Do to Save Planet Earth.” I convinced governors to announce International Earth Day proclamations. I got citizen groups to hold International Earth Day Awareness events. I even convinced a talent booker on The Today Show to interview an expert on the continued importance of environmental awareness and conservation.

How did I get so many people to follow my lead. Simple. I told them all, “Hey, I’m Head of the Earth, and you breathe the air. Or use the airwaves. We need your help.”

My stationery was on recycled paper, so people must have figured I was for real.

But my biggest accomplishment was getting the support of the United Nations.

STAN: OK, Harriet, there he goes. I believed everything Goldberg said up ’til now.  But getting the UN’s attention? I’d love to hear how this one turns out.

I remember my first phone call to the UN. It went something like this.

“Is this Whitman Bassow, Senior Public Affairs Officer at the UN?”

“I’m Jack Goldenberg, Head of the Earth. We need to talk.”

Without questioning my authority, Whitman Bassow laughed and said, “When would you like to come in?”

I can understand why you might not believe this actually happened. It’s impossible to get the UN to do anything, right?

Hell, the UN is so dysfunctional, they would’ve never pulled off UNICEF if it hadn’t been for millions of kids pulling their international ass out of the fire.

But I lucked out because, as it turned out, Whitman Bassow was the one person at the United Nations who actually had a sense of humor to go along with his sense of decency. And when I met with him, he championed my idea. He wasn’t just humoring some crazy 25-year old who claimed to be Head of the Earth. He was in from the start.

He even sent me an official UN letter to prove it. (NOTE TO MY YOUNG READERS: A letter is like an e-mail that’s written on…Oh, never mind, you’d never believe it!) 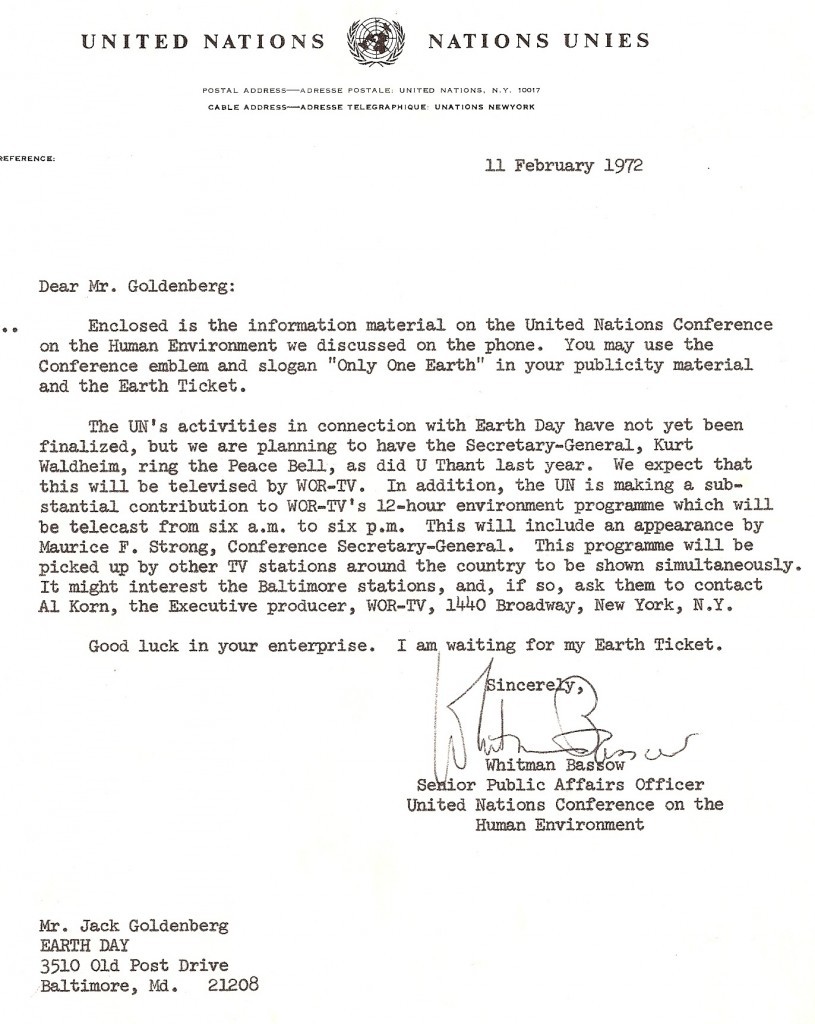 Heck, if the Senior Public Affairs Officer of the UN thought I was Head of the Earth, maybe I really was!

Somehow, I got the UN to acknowledge that I was Head of the Earth and they even gave me permission to use the UN’s name, logo and slogan from their “Only One Earth” Conference on my “Tickets of Admission to the Earth.” I wanted to charge people for coming to the Earth on Earth Day, 1972. A dollar for adults. 50¢ for children 12 and under.

As I saw it, while it wasn’t mandatory to have an Earth Ticket to show up on Earth on April 22, 1972, it sure would be a nice gesture, though. And I wasn’t planning to abscond  with the money. All donations were earmarked for Friends of the Earth, Friends of Animals, the Sierra Club and two other environmental groups.

Was my campaign for International Earth Day successful? Well, yes and no. The Earth is still here, but even with all the recycling, conservation, pollution control etc, we’re still fouling up our home planet.

And even with the icebergs melting, drought on the West Coast  and far too many other harbingers of environmental doom and disaster, there are still far too many powerful people denying climate charge. They have a name for people like that. Republicans. Well, the extreme right wing of the Party of No, just to be more exact.

A few years later I wanted to proclaim myself “Master of the Universe.” But some damn toy company beat me to it.

HARRIET: There, Stan, now are you satisfied? Jack really was Head of the Earth.
STAN: I don’t care. I’m still getting out of here. I’ll write my own damn blog. And I’ll make Goldberger the but of all my jokes.
HARRIET: Stan, you can’t write. You can’t think. You can’t even spell the word butt correctly.
STAN: Butt, does it really matter, Harriet ? Maybe I was talking about a different kind of but.
HARRIET: Stan, you are a different kind of butt.
STAN: Thanks, Harriet. Thanks for noticing.
HARRIET: All right, say Goodnight, Stan!
STAN: Goodnight, Stan,
HARRIET: Good night Readers. Thanks for stopping by. I hope you’ll sign up for the blog or come back next time when Stan will attempt the impossible, to write his own blog without Jack’s help.