This Blog was entirely written by Jack. Stan had nothing to do with it.

STAN: Hi, everyone, I’m Jack Goldenberg. Welcome to my new blog.
HARRIET: Psst, Stan.
STAN: I hope you find today’s blog more interesting than the boring, stupid, childish drivel I usually write.
HARRIET: STAAAN!
STAN: What is it, person I’ve never met before?
HARRIET: Of course, you’ve met me, Stan. And why are you calling yourself Jack?
STAN: Ha, ha,  person whose name I do not know. Because I am Jack Goldenberg. And I’m premiering my new and improved blog, 10 Minutes of Brilliance. Personally, Harriet, or, whatever your name is, I wanted to call it 10 Minutes of Stan, but I was afraid that might give away who was behind it.
HARRIET: You think? Look, Stan, people who read this blog know you’re not Jack. You’re Stan, the imaginary guy on Jack’s blog. Jack writes everything you say.
STAN: Oh, I know why you have us confused. Jack and I look alike. We’re both very handsome. Well, Jack’s not. But I am. I ‘m taller,too, of course. He’s kinda short. And I think he smells bad.
HARRIET: I hate to point it out to you, STAN, but every time you talk, it says STAN on the side of the blog. See. My name’s there, too.
STAN: Oh, ah, I see. Say there, mysterious person who should be minding her own damn business, would you mind stepping off the blog with me for minute?

STAN AND HARRIET WALK OF THE BLOG. STAN PLEADS WITH HARRIET IN AN ANIMATED, BUT LOW WHISPER.

STAN: Jesus Christ, Harriet! Can’t you go along with me? Pretend I’m Jack?
HARRIET: But why, Stan, why the masquerade?
STAN: I’m tired of being the go-to imaginary character on Jack’s blog. I want to be free. I want to be me! Sorry, I think I was channeling Marlo Thomas.

C’mon, Harriet. Can’t you just stick up for me this one time? Let me be the blog STAR of the moment.
HARRIET: Oh, OK, I suppose it’s all right. Yeah, I guess so. What topics are you gonna write about?
STAN: Topics? You mean, I have to have topics? I thought I’d just wing it. You know, sling some Scream of Consciousness BS like the Golden Boy does. It seems to be working for him. He has over 20,000 subscribers!
HARRIET: All right, sure, I’ll go along with you. As long as we don’t get caught. In fact, I know where Jack keeps some material he was gonna post online.
STAN: Gee, thanks, Harriet, you’re swell.
HARRIET: Who are you channeling now?
STAN: Not sure. I think it was Mickey Rooney.

HARRIET LOOKS THROUGH SOME FILES ON JACK’S DESK AND FINDS SOME NEW MATERIAL.

STAN: What’ve you got?
HARRIET: Oh, I found some cool stuff:

STAN: Well, let’s get the show on the road before you-know-who shows up. First up, a post on Twitter

In honor of the 140-character limit on Twitter, here are 140 things you probably didn’t know about this world-famous microblogging service. Since that may be far too much information for anyone except a card carrying member of the Twitterati, I’ll just post 5 Twitter facts here. The other 135 Twitter trivia facts can be found on the link at the end of this post.

Odeo logo, before Twitter and the blue bird showed up

1. Twitter almost never happened. In 2006, there was a company called Odeo, which helped individuals publish audio. With a lack of growth and investors souring, the company decided to conduct a hackathon one day. This brainstorming competition led to the birth of Twitter.

(A hackathon is an event where computer programmers and others involved in software and hardware development, (including graphic designers, interface designers and project managers), collaborate intensively on software projects.) 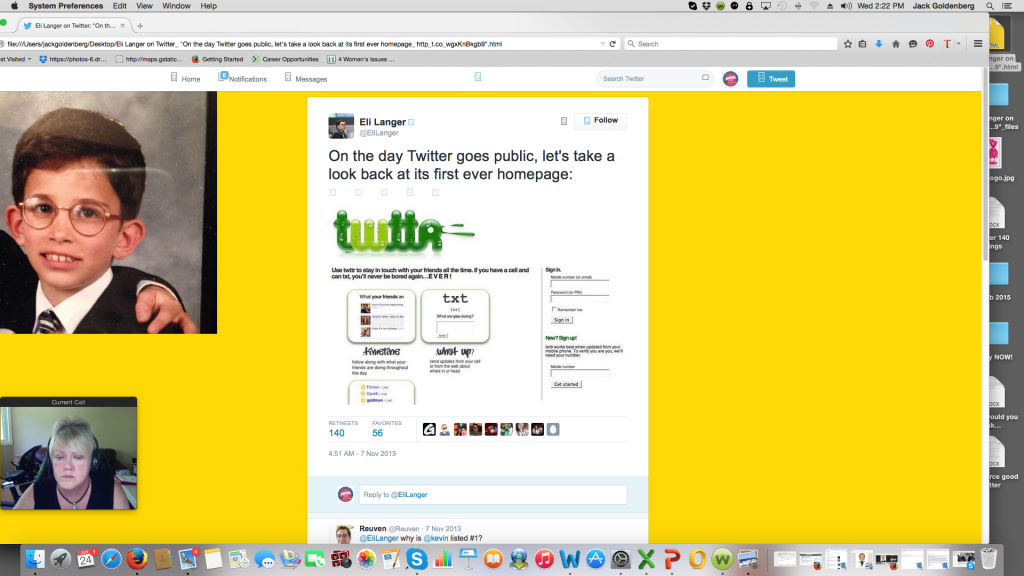 3. Twitter was created on a playground. Founding team member Dom Sagolla says the group went on the top of a slide at a playground in South Park, a small neighborhood in San Francisco, and Jack Dorsey discussed an “idea so simple that you don’t even think about it—you just write.” This moment of inspiration turned into a multi-billion-dollar company.

4. When Twitter began, everyone’s first tweet was automated. Co-founder Jack Dorsey (who will become Twitter CEO in one week on July 1) sent the first tweet—”Just setting up my twttrr”–beating Biz Stone, another co-founder, by a minute—on March 21, 2006, at 4:50 p.m. PT. That first tweet now has more than 50,000 retweets.

5. The user with the most followers is singer Katy Perry, She has a modest 67 million followers. 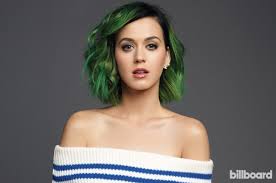 Introducing, Palcohol, the new powdered alcohol. Just what we need. Not!

Palcohol is a new powdered alcohol.

I had an uncle who was so drunk, he once fell off a barroom floor.

Singer Dean Martin  used to say, “Don’t drink and drive. You might spill your drink. And remember, he was the straight man.

We return you now to our regular programming.

As a writer, I love to see brilliant writing. And if it’s funny,clever and makes you think about it, all the better.

One of my all-time favorite signs was just four words written on the wall of the men’s room at the Vince Lombardi Rest Stop on the New Jersey Turnpike. It was posted with an arrow pointing to the paper toilet seat dispenser. It said:

Another gem was on the back of a truck owned by the Sober Electronics Company from Baltimore, Maryland. The sign said:

The driver of this truck in not Sober.

STAN: Speaking of signs…How that for a segway, Harriet.
HARRIET: It’s not a segway if you don’t complete it!
STAN: Details! I’ll try again. Speaking of signs, here are some really cool Canadian billboards sent to Jack by his friend Steve Cline.
HARRIET: Is Steve from Canada?
STAN: No, Jack’s partner, Lesley Vender Welle  and her friend, Gee, are Canadian. Anyway, here are those Canadian billboards.

Ah, if we only had Bounty, the quicker sludge picker upper

Remember, any money you bet in Vegas STAYS in Vegas

Education am a good thing.

Where is Nancy Reagan when we need her?

Not surprising from an org. that thinks GOD is man’s best friend?

HARRIET: Hey, were those were really Canadian billboards?
STAN: Shhh. I don’t want Readers to know. I lied. They were just some funny faux billboards dreamed up by a company called Dribbleglass.com .
HARRIET: I won’t tell. It’ll just be a secret between you me and Jack’s 40, 000 monthly visitors. Say, it’s a shame you don’t have some embarrassing photos of Jack to post on his blog.
STAN: Oh, but I do. Here’s one. Jack when he was Indiana Jones. 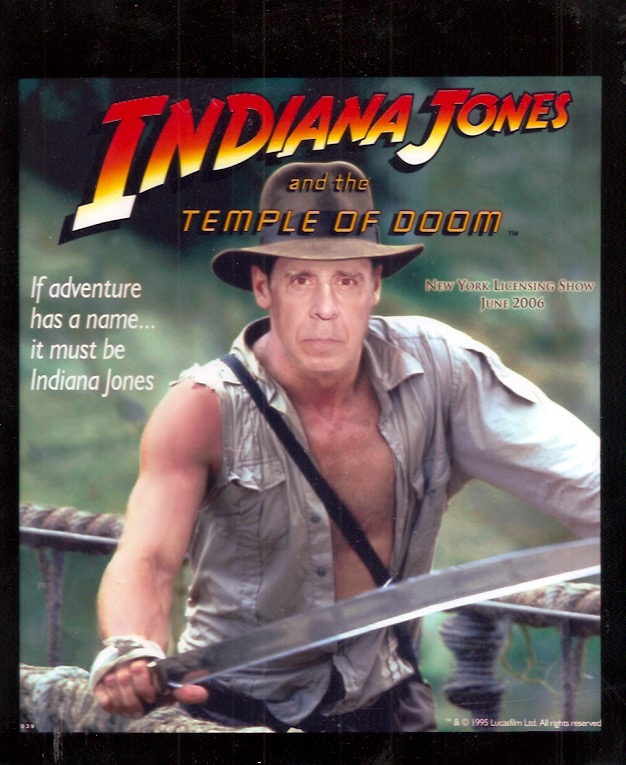 HARRIET: Stan, I was just kidding. Please, no more.
STAN: Just one more. Jack as a Mexican wrestler. 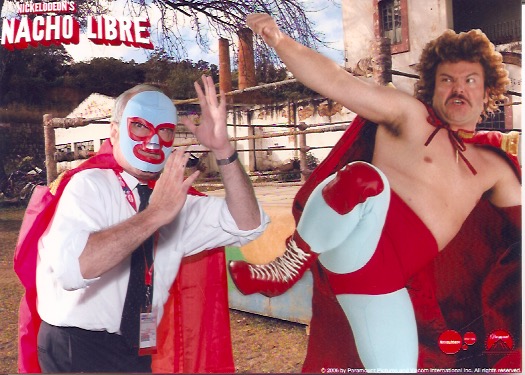 Hey, who refried the beans. I don’t even know what that means!

HARRIET: Put them away. Jack’ll kick us off the blog if he sees them.
STAN: He’ll NEVER see them. He’s busy preparing for a trip to New Orleans.
HARRIET: New Orleans? Did he win that contest? The one for marketers who break the rules?
STAN: Yes. But let’s get outta here fast. I think I just saw Goldberg pull into the blog parking lot?
HARRIET: This blog has a parking lot?
STAN: Yes, and a wet bar, gym and a tennis court. But we’ve gotta scram. That’s him at the door. Hurry.

STAN AND HARRIET HURRIEDLY LEAVE THE BLOG THROUGH THE BACK DOOR. (YES, OF COURSE THE BLOG HAS A BACK DOOR.)

Hey, Readers, sorry I’m late. I wanted to thank my many Readers who voted for me for in the Rule Breaker Awards. You really supported me and I was one of the winners! So, I’ll be going to New Orleans in July to pick up my trophy.  I just hope I can fit it into my trophy room. It’s gettin’ kinda’ crowded. 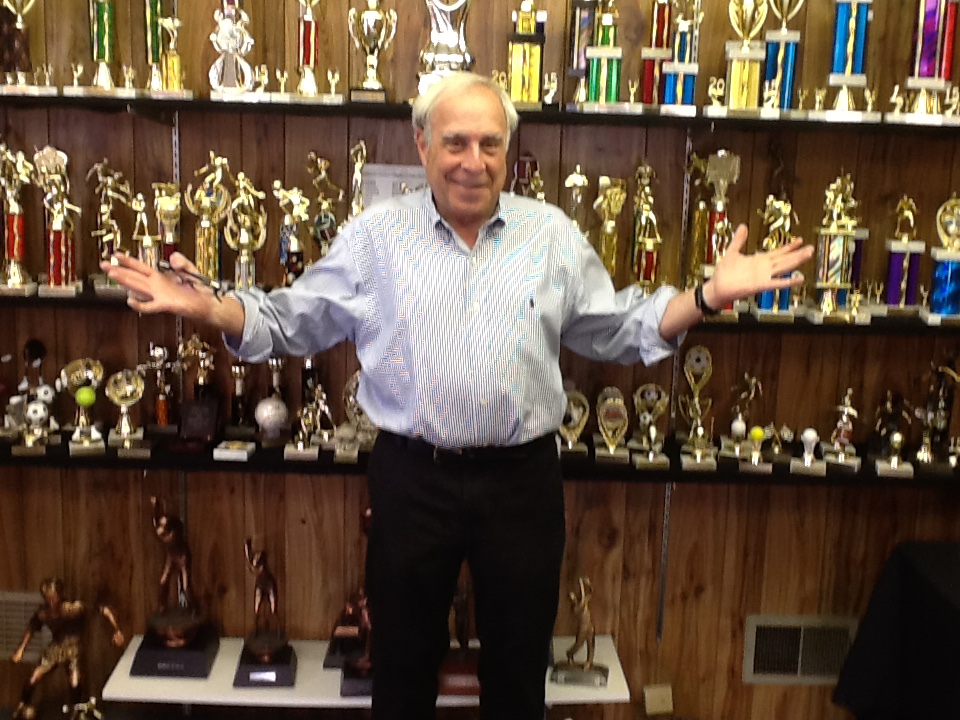 I won so many trophies for writing, there’s no room for my Trophy Wife

My favorite part about winning a Rule Breaker Award is that there will be great guest speakers at the Conference: Deepak Chopra, Gen. Colin Powell and Matthew Weiner, creator of Mad Men. It would be pretty cool if I could interview any of them for my blog. But I doubt that’ll happen. Who knows? Stay tuned.

And that’s it for today, Readers, I don’t know why you’re so loyal, but I appreciate it. In fact, I appreciate it so much, I’m going to make an effort to make the blog more interesting and more informative. Of course, I may have to get rid of STAN. But you guys probably didn’t like him anyway.

I did want to give a shout out to my friend Bingo Wyer. Yes, that’s her real name. She’s the event planner for the stars. And she did an elegantly fabulous job for a star I am close to. If I get permission to tell you about it, I will. Until then, you can check out her work at her NY studio, Cote Fleurie Studio.

Thanks again for stopping by. I’ll write faster so you’ll stop by sooner.

NOTE: Please ignore any mistakes or typos on my blog. It was sent from my rotary phone.